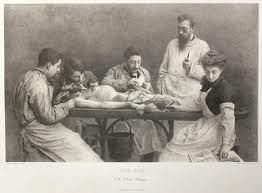 Alicia M. Alexander, “Quack is as Quack Does: How Modern Pharmaceutical Companies Have Become Quacks”

Georgia Bock, “From Stigma to Respect: A Change in Attitudes Towards Women with Breast Cancer since the 19th Century”

Glenna Colerider-Krugh, “ADHD in Children: A Historical and Cultural Explanation”

Sarah Corapi, “Questioning the Objectivity of the Biomedical Model in America: A Case Study of the History of HIV/AIDS”

Sarah Farbman, “There Were Babies Before Roe v. Wade? The Criminalization of Abortion in the 19th Century”

Clara Kirkpatrick, “The Rise of the Male Obstetrician: Childbirth as a Medical Procedure”

Kayleigh Kresse, “Insight into Victorian Era Medicine: Context to Where We Stand Today Regarding the Female Physician”

Jeanette Miller, “A Tale of Two Diseases: ADHD and Neurasthenia”

Rachael Morgan, “Morality, Capitalism, and the Limitless Unconscious: The Development of Psychoanalysis in the United States”

Natisha Robb, “The Resurgence of the Horrific, Harsh, and Ugly Reality of Childhood Diseases: The Inevitable Risk of Forgoing Vaccinations”

Chelsie Salvatera, “Victims of Forced Sterilization (Then and Now)”

Andrew Troxell, “These Statements Have Not Been Evaluated by the FDA”

Marissa Yetter, “Post-traumatic Stress Disorder: The End of a Journey or the Start of a New One?”

The views and opinions expressed on individual web pages are strictly those of their authors and are not official statements of Grinnell College. Copyright Statement.