Menstruation is something that most women experience but often don’t discuss unless in the presence of other women. The hidden nature of menstruation comes about as a result of widespread social forces that encourage women to view their bodies, and periods in particular, as objects of shame. Using sources such as books on the history of menstruation and studies that have directly analyzed menstrual product advertisements, this post attempts to explore how advertisements reinforce the societal shame and embarrassment that is associated with the period. Throughout history, women have been instructed to hide their menstruation from society. Advertisements from the late 19th century appealed to women because they offered a way to make periods unnoticeable. In fact, advertisements continue to use the same ideas to promote menstrual products now that they did in the late 20th and early 20th centuries.

Advertisements from both the 20th century and 21st century reinforce certain themes and notions about the female body. In their article, “Surreptitious Learning: Menarche and Menstrual Product Advertisements,” M.R. Simes and D.H. Berg, professors at University of Manitoba, study the messages within menstrual product advertisement from 1985-2001.[1] In their study they determined that some of these themes include the importance of being discreet, being secure, being fresh, being confident, and managing one’s body every day. Out of all the themes there was one overarching theme: the importance of using these products to prevent “getting caught.”[2] One current example of this is evident in a YouTube video entitled, Protect Those Panties with Always Infinity Pads. [3] Posted in June 2011 this video clip emphasizes the importance of wearing a sanitary napkin every day in order to remain “fresh,” and to keep the period hidden. Within the video the woman teaching young girls about the period says: “This is a panty liner I wear one everyday just to feel a little more fresh…[I] use liners for the final days of my period and the rest of the month.” This video makes it clear that buying a multitude of pads is essential if young girls don’t want to be embarrassed. 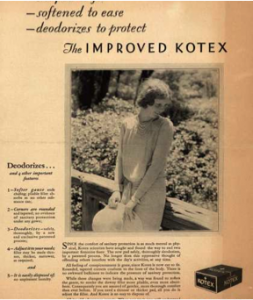 The desire to stay fresh is not new. A Kotex ad from the 1920s similarly states: “The Improved Kotex is softened to eased and deodorizes to protect.”[4] This advertisement informed women that their periods were not only embarrassing because they were messy they were also bad because they smelled bad. It was the woman’s responsibility to buy these new and improved pads.

An ad for Always pads in 2014 reinforced the notion that woman would have “that just showered feeling,” after using always pads. Like the ad from the 1920s the more recent Always ad indicates that women are gross when they are on their period and that it is their responsibility to clean themselves and to use products that allow them to do so.[5] Always has a series of advertisements that stress the fact that periods are dirty. Collectively these advertisements indicate that when women have their period they are not clean and that there is something wrong with them. 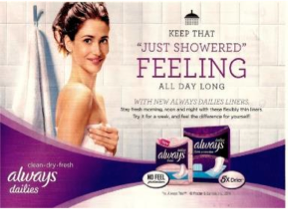 In her article, “‘Ending Women’s Greatest Hygienic Mistake’: Modernity and the Mortification of Menstruation in Kotex Advertising 1921-1926,” Roseann M. Mandziuk, a professor of communication studies at Texas State University, argues that advertisements for Kotex pads “defined for woman a distinctly active yet inconsequential social role by reinforcing the contradictory expectations that women exhibit their bodies yet cloak their menstrual processes.”[6] She suggests that this type of advertising equated menstruation with public display, consumer savvy, and shame that still affects current discourse about menstruation in today’s world. Her analysis of the 1920s can be made about current advertisements today.[7]

The ad below from 1941 indicates that women need to keep their periods invisible if they are going to participate in fun activities. For example, in the tampon advertisement the blonde girl says to her friend: “it’s invisible sanitary protection…thank heavens [they] keep my secret safe even in this bathing suit.”[8] Here, it is clear that keeping her period hidden is key to being able to participate in normal activities. 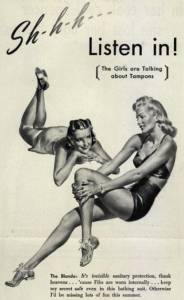 A 2014 advertisement for tampons also reinforced these same notions of invisibility. This advertisement stated that “New Tampax Radiant helps keep your period invisible. How you choose to stand out is up to you.”[9] Here, the woman is only able to participate in an activity that she wants to after she ensures that her period is invisible. Even 73 years later the same notions of invisibility remain. 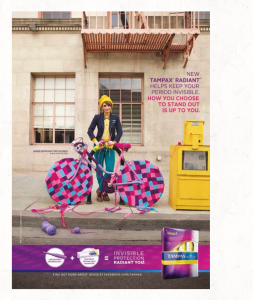 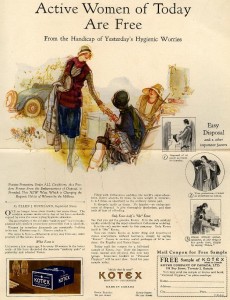 Similar to the previous two ads, advertisements also highlight the fact that women can resume “normal” activities, only after they have used a sanitary napkin or a tampon. In the ad from 1927, the woman is able to resume her shopping and active lifestyle after she has bought a sanitary napkin. The advertisement states that: “Active Women of Today are Free From the Handicap of Yesterday’s Hygienic Worries.”[10] Here the advertisement promotes that Kotex sanitary napkins are easily disposable and shows the woman visiting her friends. The idea that she wouldn’t be able to do this without a specific sanitary product seems unlikely. 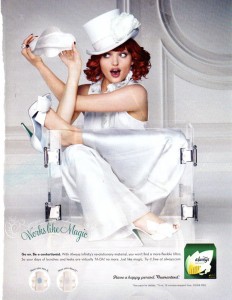 The other advertisement shown to the right is from 2010. This ad suggests that Always pads “work like magic.”[11] In this advertisement the woman is portrayed as being able to contort her body in a multitude of ways because she has access to a sanitary pad. Not only do ads then reinforce notions of shame, the language and imagery used also suggests that woman should be able to do even more on their period than they can when they are not on their period. While, it is important for women to not be pushed back because of their periods, advertisements create a de-sanitized image of the period. Instead of acknowledging that the period affects the body advertisements create an idealized view of what having a period feels like. As a result, these ads make it harder for women to engage in public discussions about their period.

Above everything else the advertisements reinforce notions that periods should be kept secret in order to protect men. Having a period is seen as a disability and being able to hide it is key to becoming an equal member of society. In a Kotex advertisement from the 1920s, women were expected to hide their periods from men if they wanted to succeed in the workforce. In the advertisement, the woman office manager tells the newly hired staff that, “women in business find that this modern sanitary napkin means better health and greater opportunity for accomplishment.” By keeping their period hidden women could become productive members of an office environment allowing them to potentially enter the middle class.[12] 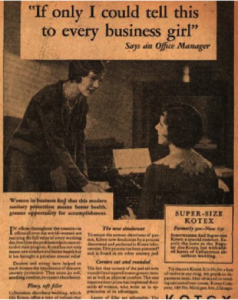 An excellent blog on periods and advertising can be found at Menstruation in Advertising. For the purposes of this post, I wanted to focus on one particular image on the Menstruation in Advertising blog. This advertisement shows a man who is worried that he won’t be able to have sex with his girlfriend on Valentines Day because of her period. The ad promises that Mother Nature can be defeated with Tampax.[13] Though it is unclear how this can happen when having sex with a tampon on is medically ill advised. Moreover, the advertisement makes the focus about the man. Instead, of acknowledging that a woman may want to have sex on her period or may also not want to, the ad promises men that they will always be able to get sex when they desire it. These types of ads teach both men and women that periods are not something that men should have to deal with. This sentiment reminds the audience that women have to hide their periods in order to protect men. 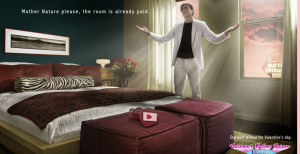 This preponderance of ads seems to indicate that the conversation about menstruation is occurring constantly. However, these advertisements do the exact opposite. By using language that promotes invisibility and feelings of being dirty, advertisements instead reinforce the notion that women should not publicize their periods. Moreover, these advertisements never depict or show blood instead choosing to use blue or green gel. Recently always has shifted to using a red dot to indicate the period, but even this reinforces the notion of sanitation. By separating periods even from the color red, advertisements hide the very image of what a period is.

Ads from the 20th century and 21st century highlight many of the same themes. This relationship is interesting because it shows that even though women have a gained as significant number of rights since the early 20th century, they are still expected to feel ashamed and guilty about their periods. Even though sanitary products are a necessity for many, the way they are advertised does not need to parallel the ads of the 20th century. Instead, advertisements could focus on creating an actual dialogue about periods.

The views and opinions expressed on individual web pages are strictly those of their authors and are not official statements of Grinnell College. Copyright Statement.